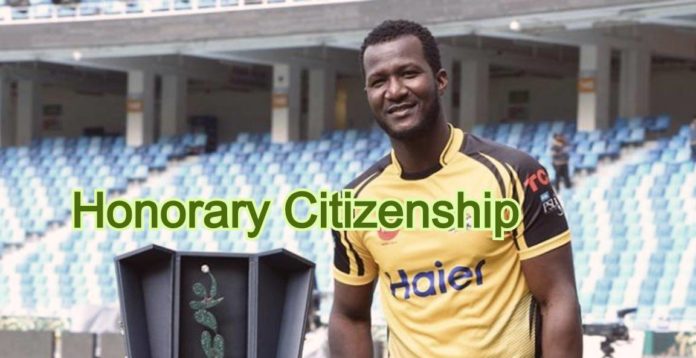 The Star of PSL so Far Darren Sammy will receive Honorary Citizenship of Pakistan . Also called the Nishan e Pakistan. For those who have no clue let me tell you Nishan E Pakistan is the highest civil award of Pakistan.

This Award and citizenship is given to the West Indies player as a thanks and acknowledgement. Because of his dedication for cricket in Pakistan. The Zalmi Captain will receive the award on 23rd March.

This is for the first time in history that an international cricket player is getting this award. Sammy has clear thoughts about his citizenship. He is not doing this for any material purpose.

The player is overwhelmed to see the love of Pakistan and its people towards him.

He has also clear thoughts regarding passport. Sammy has already included that other international players have played a vital role. Especially bringing the international cricket in Pakistan.

He thinks passport is not necessary to associate himself with Pakistan, It is the love that connects him with it.

Moreover, Afridi included that Honorary citizenship of Daren Sammy is to show him love and respect. As he has played an important role in making international cricket possible in Pakistan.

Darren Sammy is an all rounder in Cricket. He has played so many matches. He has become captain of his team for so many times. Now he is the captain of Peshawar zalmi in PSL 2020.

Darren is very happy to be able to play infront of his fans. It makes a person very emotional to see such love and respect outside its own country.

He says he had the best security team and there was nothing that scared him regarding security. Everyone helped in maintaining the safety.

let us know about your thoughts on this.