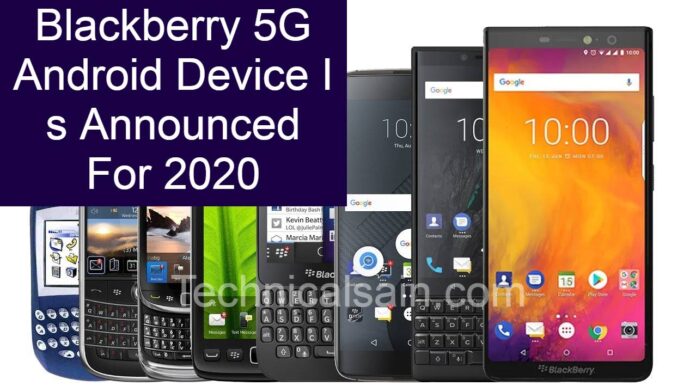 Blackberry is making a huge comeback right this 2021. Blackberry 5G Android phones are right now the talk of the town. Before Blackberry was dealing through a TCL company.

Now with the announcement of the company, it will cease any sales of the brand. The company says it will no longer deal in the Blackberry phones. However, Blackberry is launching the new mobile from a company named OnwardMobility.

The company will launch Blackberry 5G Android in 2021. The device will have the typical Blackberry keyboard. But this time with some enhanced security features.

OnwardMobility has worked for the government also. we do not know about other countries. But Blackberry will reach the markets of North America and Europe. The company is introducing blackberry phones with foxcon the subsidiary of FIH Mobile.

The phone will be rich in security. Most customers look for 5G connectivity that is fully functioned and secure. Now Blackberry is ensuring it. The company has to revive itself as it was famous once. After disappearance. It came back under TCL.

But now it’s come under Onward mobility. The specifications are still unknown. They will reveal them when the time is right. According to the CEO of Blackberry John Chen, The company is Thrilled that OnwardMobility will deliver a smartphone. Not any smartphone, A Blackberry 5G Android mobile phone.

Well, with the previous reputation of Blackberry phones we do not know if this will be a hit or miss. But let’s not jump to any assumptions beforehand. Moreover, Blackberry was once on its peak of fame. But after the arrival of iPhone and Google mobiles, Its demand was very low.

Because touchscreens were the thing and people did not want a smartphone with keyboards after that. It was due to this all that Blacberry announced in 2016. It will no longer make their own phones but will produce them from others.

Oppo F17 Pro launch. When Is It Happening?